It's been over a month now since Japan has literally been shaken to its core due to a series of large earthquakes and hard-hitting tsunamis that occurred as a result. To this day, the vulnerable archipelago is still suffering through more aftershocks and the nuclear disaster scare continues to escalate. All of this has taken a huge toll on the people of Japan as shown by the reactions of the government and the mass media. Foreign press praise the Japanese for handling the situation relatively well and there's also no doubt that much credit should be given to the architects and engineers who helped create buildings designed to withstand the violent effects of the quakes. Before I go further into what I think about how the population is handling itself during this time of disaster, I want to put it into perspective of a certain anime that aired a couple years ago. 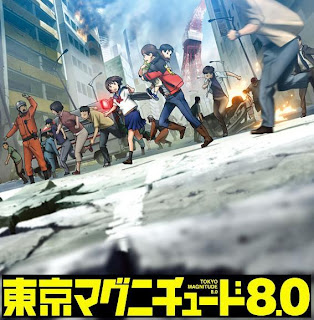 Tokyo Magnitude 8.0 is a show that was created on the basis that in the next thirty or so years, Tokyo has a 70% or more chance of  being hit with an earthquake of 7.0 magnitude or higher. With a realistic depiction in mind, the show attempted to recreate what would possibly happen in the aftermath of such a disaster after doing much research based on previous incidents as well as cooperation with the Self Defense Force, Coast Guard, Tokyo Fire Department, and Tokyo Disaster Medical Assistance Team. This provided insight into how people would respond to such an event alongside the tearjerker of a story about a girl and his younger brother attempting to get reunite with their family. I still can't get over how only two years ago Tokyo Magnitude 8.0 aired and now Japan continues to face the wrath of nature in an eerily similar circumstance. The Tokyo Tower may not have fallen but Sendai was literally destroyed while tsunamis wreak havoc and nuclear power plants threaten to remind everyone of Chernobyl.

While my own fear and concern of the safety of Japan still exists, I have recently been able to stand back and assess the various situations that have occurred during the aftermath. Two things that bother me to no end are the media and the re-elected Governor Ishihara. One creates mass hysteria while the other calls for "self restraint" yet they peform hand-in-hand. It's ridiculous that TV Tokyo, after having a 33-hour coverage of the earthquake when it all began and this deciding to resume its regular schedule and air late night anime, gets heavily chastised for doing such a thing. Certainly, one should be sensitive to the situation around them but to wallow heavily all the time is not very healthy either. Ishihara also had nerve to call the disaster a "divine punishment" which obviously did not go well with the population. Regardless, he rallies the people of Japan under the flag of "self restraint" in which one should practically avoid any form of entertainment. Sure, rolling blackouts to conserve energy and cancelling events in such a time of crisis is understandable but to suggest that hanami, or cherry blossom viewing, of all things should be cancelled this year is beyond ludicrous. This unfortunate message has carried far as demonstrated by the people who have stopped shopping and busy streets are no longer bustling as they should be. This will only further deter a failing Japanese economy by following such dogma that resembles the line of thinking during the Second World War. Anime, manga, and the like are especially put under the pressure of self restraint which has led to lengthy delays of airing episodes and putting serializations on hiatus. With Bill 156 looming ever closer, the industry will surely collapse under Ishihara's outdated beliefs.

Japan is in terrible physical danger but now the vitality of the nation is even more at stake. The lost generation continues to have small aspirations and now people are simply too traumatized to enjoy life again. The media needs to quit the scaremongering and Governor Ishihara needs to step down in order to prevent Japan from truly losing any life it has left. I believe the best we can do to help besides donating to the Japan Red Cross and other organizations of similar repute is to educate and prevent hysteria from crippling a nation that has become far too vulnerable, physically and emotionally. It is okay to live life like before the earthquake. Healing can be accomplished together.
Posted by Unknown at 11:14